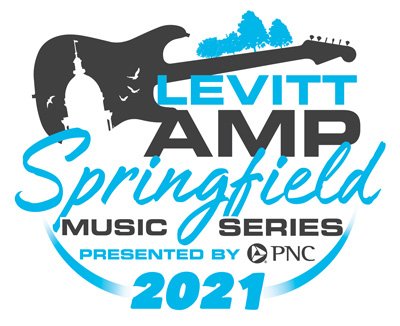 The Levitt AMP Springfield Music Series presented by PNC Bank, a free, ten-week concert series featuring a diverse line-up on the “Y Block” next to the Governor’s Mansion, is made possible by a matching grant from the Mortimer & Mimi Levitt Foundation, a private foundation that partners with towns and cities across America to activate underused public spaces, creating thriving and inclusive destinations where people of all ages and backgrounds come together through the power of free, live music.

The second season of this Music Series, voted “Best Free Entertainment” by Illinois Times readers in 2019, returns on Thursday evenings from June 3 – August 5!

Check out the 2021 Music Lineup here

Thanks to All of the 2021 Season Community Sponsors

When You’re on the Y Block/What to Expect

Rewatch the 2020 Levitt Virtual Series tour including Springfield’s own, The Deep Hollow.

YBlock in 2018  Photo by Patrick Russell

For decades, a large vacant lot has dominated an entire city block in the center of downtown Springfield. Once home to the Hotel Abraham Lincoln, which was demolished in 1978, the lot — known as the “Y-Block” — fell into disuse after a plan to build a state court complex and legal education center on the site was halted shortly after the demolition. For many years, the vacant space served as an informal parking lot for city employees, but was of little use to the general public. In 2014, the City of Springfield purchased the lot, though revitalizing it proved to be difficult — after three rounds of proposals, a consensus had not been achieved, and years later, the site remained entirely unused.

In 2018, a group of nonprofits in downtown Springfield (Downtown Springfield Heritage Foundation, Downtown Springfield, Inc., and Springfield Area Arts Arts Council) partnered to apply for a Levitt AMP Grant as a first step towards activating this “sleeping block” in the heart of the community. After seeing how a Levitt AMP series in nearby Jacksonville, Illinois, about a 45 minute drive from Springfield, had revitalized a public space in that community, [the] organizers hoped that a Levitt AMP series would engage the public and bring residents from all parts of the city into the discussion surrounding the lot. “The city had been squabbling over whether it should be a park, or a park and a building, or a giant residential area,” recalls Lisa Clemmons Stott, DSI Executive Director, “and we thought Levitt AMP would help us have a more intelligent conversation about the future of [this space].”

Nearly 8,000 people attended the inaugural Levitt AMP Springfield Music Series last summer, and lawn surveys conducted by volunteers show an enthusiastic response from the community. Over 80 percent of respondents said that they would like to see a permanent concert venue in the space, and would regularly attend concerts if a permanent band shell was constructed. Other suggestions from the community include a dog park, tennis courts, food truck plaza, and more. “No one was using this block before Levitt AMP,” says Clemmons Stott, “and now people see the possibilities.”

A place to be together
In addition to renewing interest in this long-dormant public space, the Levitt AMP Springfield Music Series has also served as a catalyst for addressing deep-seeded divides in the city. More than three quarters of Springfield residents are white, while 15 percent are Black, and historically, race relations have been difficult. In 1908, a violent riot erupted against the city’s Black community, creating a wound that is far from healed over a century later. “We have this dual nature,” says Clemmons Stott. “We’re the home of Abraham Lincoln, but we are also the site of such a tragic incident.” In response to the violence in Springfield, W.E.B DuBois, Ida B. Wells, and others founded the National Association for the Advancement of Colored People (NAACP), now a leading civil rights organization.

As a neutral site where the East and West sides of Springfield literally come together, the organizers hoped the concerts at Y-Block would foster a space where people of all cultures and races [will] feel welcome.